Please Note: The Meeting of the Council due to be held on Wednesday 18th March 2020 at Carlton Methodist Church has been cancelled following Government advice and guidelines on the Corona Virus.

Please click on this link to visit the Selby District Council’s website for information about the help you may be entitled to following the recent floods.

Repeated cases of dog fouling on Main Street, between the War Memorial and Back Lane, have been reported to the Parish Council. The Parish Council work in partnership with Selby District Council and have therefore informed them of the issue.

Selby District Council have adopted the Anti-Social Behaviour Crime and Policing Act 2014. Under this it is an offence to fail to clear up the mess made by a dog which is in your charge on any designated land in Selby district. The maximum penalty for this offence is a fine of £1000.

Designated land is all land to which the public have a right of access.

The following are not acceptable excuses:

This means that Selby District Council have the potential to prosecute owners who let their dogs roam unattended.

A big thank you to all those who took part in the Annual Spring Clean on the 17th February. In total fourteen bags of rubbish were collected from Hirst Courtney and West Bank. Thank you to Selby District Council for providing the equipment and bin bags.

Hirst Courtney and West Bank Parish Council laid wreaths on the village war memorial in tribute to those from the villages who gave their lives in times of war.  A special wreath was placed to commemorate one hundred years since the Armistice that ended the First World War. 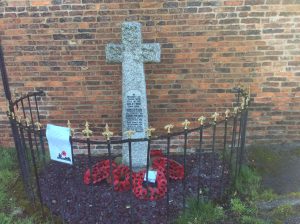 The Parish Council are collecting evidence of motorists speeding through Hirst Courtney & West Bank in a bid to resolve this long standing issue.

If you see a speeding vehicle please report the time and date of the incident to the parish council  by emailing: clerk@hirstcourtney.co.uk .  If possible please include a description of the vehicle(s) and number plate(s).